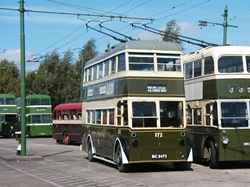 By the standards of the various, now defunct, trolleybus systems in the United Kingdom, the Derby system was a medium-sized one, with a total of 11 routes, and a maximum fleet of 73 trolleybuses. The system was much cheaper to run than motorbuses but the end was signaled when proposed extensions to the network were blocked by protest to the additional poles and cabling that would be required. The system was closed on 9 September 1967.

There were,, over the years, 165 Derby trolleybuses passing through the fleet although this figure includes six that were second-hand. Five of the former Derby system trolleybuses are now preserved. 172 is at the Trolleybus Museum at Sandtoft.  A second one, 175 is kept at the Trolleybus Museum's off site Westgate store in Belton, nearby. A third is based (but privately owned) at the East Anglia Transport Museum, Carlton Colville, Suffolk and runs regularly.  The other two are privately owned and stored at unknown locations in the U.K.

Some electrical work needs to be undertaken on 172, and its 'austerity' bodywork requires a repaint. Other than that the vehicle is relatively serviceable. It was in regular service at the Museum until 2018, when a breakdown of resistance insulation meant it had to be taken out of service.

The vehicle can be viewed at the Museum with the assistance of a member of the voluntary staff.