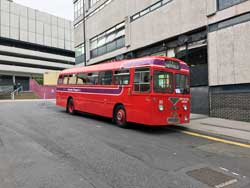 After some not entirely successful AEC Reliance's, Doncaster Corporation Transport ordered five Leyland Tiger Cubs with Roe bodies. They were 30-foot long by 8-foot wide and were fitted fro one-man operation. They were delivered in red with white window pans, though numbers 31 and 32 were given high-backed seats (ex Regal III's), reseating them to B41F, and painted in a pseudo coach livery in October 1967. Apart from the pretend coaches, the Tiger Cubs were used on town services, particularly Hexthorpe, Hyde Park and Racecourse. Unusually, they were fitted with constant/ synchromesh gearboxes, making them a very rare Tiger Cub variant. Number 33 became S.Y.P.T.E. number 1033 after passing to the Executive on 1st April 1974 and upon eventual withdrawal was placed on permanent loan to D.O..LR.S. Of the five Tiger Cubs purchased by Doncaster Corporation, number 33 was the only one that was never altered and also never carried the S.Y.P.T.E. livery, remaining in Doncaster colours until its withdrawal. It was later restored under the Cobalt Scheme and repainted in the R.R. Davies livery of red with purple and white upswept band. Although it was never 100% reliable number 33 became the regular service motorbus at The Trolleybus Museum at Sandtoft, where it still resides today. Number 33 has also rallied extensively. However, all the hard work took its toll and number 33 is now off the road, requiring both mechanical and cosmetic restoration work. In 2005 the ownership of number 33 passed to D.O.L.R.S. outright.

In 2018/19 much work has been done on the lower front end, and the engine has been overhauled.