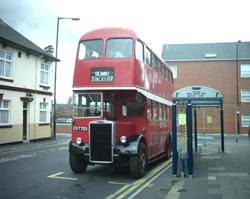 Number 94 originally had a Leyland metal-framed body of H30/26R configuration. Doncaster received four Leyland bodied Titan PD2/1's in 1947/8. They had Leyland 0600 engines and rather troublesome synchromesh gearboxes, eventually replaced by constant mesh/synchromesh units. These vehicles were lively performers in more ways than one and their suspension originally left a lot to be desired. Initially used on the Intake and Leicester Avenue routes, they later spent much of their time on Woodlands and Highfields. Number 94 was re-bodied with its current body (ex Doncaster trolleybus number 393) in 1963 and re-entered service in January 1964. 94 went on to serve Doncaster Corporation in all day service for another 10 years completing more than 1 ¼ million miles. These unusual hybrids caused much interest at the time and when withdrawal eventually came Tom Bamford, then Doncaster Corporation Transport General Manager, was eager to see one preserved. Number 94 was placed on permanent loan to D.O.L.R.S. and was chosen, after discussion between Les Flint, D.O.L.R.S. Chairman, and Tom Bamford, because it had the highest mileage of all the PD2's. It was not a good choice in reality, as a cracked chassis member had been welded and plated, the reason that number 94 always seems to be leaning to one side! Withdrawn in 1973, it was taken to The Trolleybus Museum at Sandtoft in June 1975 and was rallied frequently for some years. It later received a replacement engine and some bodywork repairs were undertaken. In 2005 the ownership of number 94 passed outright to D.O.L.R.S.

In 2018 an extensive program of refurbishment was started, and work continues today. The work includes re working the upper and lower saloons, body paneling as necessary, re-painting internal and external, work to the fuel tank and piping, braking system, springs and much more. It is hoped that the vehicle should be able to re-enter service in 2021.