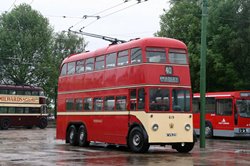 The Huddersfield trolleybus system opened on 4 December 1933, gradually replacing the tramway network, which closed on Saturday, 29 June 1940. It was a medium-sized system with a total of 15 routes and a maximum fleet of 140 trolleybuses. It closed on 13 July 1968.

A notable feature of the system was the Longwood trolleybus turntable, which was one of only four such turntables ever to have been constructed in the UK. The turntable was manually-operated and was in use only in 1939–1940 until wartime conditions forced the introduction of other arrangements. However, it remained in situ until demolished in the 1980s.

Up to the last deliveries Huddersfield trolleybuses retained several features of early 1930's practice. Platforms had two steps from the road; the rear platform windows were two-piece; and all vehicles were 3-axle and 7ft 6in wide, even though 2-axle buses of this length were made legal in 1956 and the 8ft maximum width had been permissible since 1946.

619 was built in 1956. Numerically the first of a batch of 12 it was the last to enter service. Withdrawn six weeks before the Huddersfield trolleybus system closed it was purchased by the local BUT Preservation Fund, which became part of the West Yorkshire Transport Circle, one of the Museum’s four founding societies. Before coming to Sandtoft it was used to tour the Teesside system in January 1969. In 1971 it became the first trolleybus to transport passengers under its own power at Sandtoft, albeit with a bank of traction batteries the length of the lower deck. For a while it moved to “Transperience”, near Bradford, which was able to operate trolleybuses, although a low bridge prevented double-deckers from running.

A regular service vehicle at the Museum, 619 is privately owned, and in very good condition.