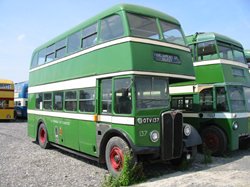 Nottingham Corporation ordered 112 Park Royal-bodied AEC Regent III double deckers with delivery due to commence in 1950. However there were a number of delays and the first examples were only delivered in May 1953. By that time the Construction & Use Regulations had been relaxed, increasing the length of double deck buses from 26ft to 27ft and the chassis of the 72 built in 1953/4 were designed for bodywork of this length. However, Park Royal appear to have put the supply of body parts in hand soon after the order was placed with the result that they were to the 26ft design with only 56 seats, and had to be adapted for the longer wheelbase chassis. The rear overhang is shorter than normal as a consequence.

The gearbox is four-speed epicylic with preselector control, coupled to a fluid flywheel.

In 1968 Kingston on Hull Corporation found itself short of buses and purchased several redundant members of the Nottingham fleet including 137, which became Hull 157. When withdrawn from passenger service 157 was converted to a driver training bus with its seats removed, in which role it lasted until 1975 when it passed into preservation, Passing in 1981 to David Needham, a long-serving volunteer at the Trolleybus Museum the bus was moved to Sandtoft and has largely been restored to its Nottingham condition. It was bequeathed to the Museum when David sadly passed away in 2019.

It still requires some work before it can enter service but 137 can be viewed at the Museum when accompanied by a member of staff.