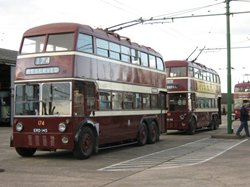 Reading Corporation ordered 12 of these 6-wheel Sunbeams to replace some of tits oldest trolleybuses and these were delivered between October and December 1950. Numbered 170 to 181 they were 8-feet wide with rather angular Park Royal bodywork which included safety features such as cab mirrors to allow the driver to view the lower saloon and (most prominently) platform doors. These operated an interlock cutting power to the motor when open. An over-ride for emergency use was provided in the driving cab, but this illuminated two bulbs mounted on the bulkhead behind the driver which were visible through the windscreen: this enabled an inspector to see from a distance if the over-ride was in use.

When new 174 was exhibited at the Commercial Motor Show in London and received chrome-plated windscreen frames as a result - those of the others were painted. Some bodywork issues in early life were resolved and many of the batch survived to the end of trolleybus operation. 174 was one of the trolleybuses in the convoy performing the ceremonial last journey on 3rd November 1968 - the others were similar 181 and BUT  4-wheeler 144, both also preserved at Sandtoft.

Kept in the Reading area until 2006 174 has undergone much restoration and is an occasional performer at the Museum.