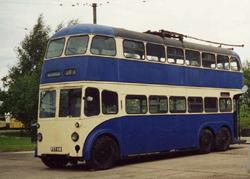 The Rotherham system was one of the earliest trolleybus installations in the UK, opening on 3 October 1912. It was a medium-sized operation with 10 routes and a maximum fleet of 80 trolleybuses. In an area plagued by low bridges only single-deck trolleybuses were purchased.

Between 1948 and 1950 the fleet was almost entirely replaced by 44 new Daimlers. These had the fleet's standard 6-wheel centre-entrance layout with bodywork by East Lancashire Coachbuilders of Blackburn. Electrical equipment was by Crompton-Parkinson or English Electric.

44 started life as fleet number 18 and is a Daimler CTE6 with English Electric components entering service in 1950. However, single deck operation was by that time starting to become uneconomic and after the abandonment of some routes by 1954 only one section (Mexborough) dictated the use of single deck vehicles. It was therefore decided to rebody 20 of the postwar Daimlers as double-deckers and 18's chassis was the last to be so treated. It was sent to CH Roe of Leeds in 1957 for a new 70-seat body. The "new" bus was renumbered 44, re-entering service later that year.

It remained in service until the closure of the system in 1965, as did sister vehicle 37. 44 was subsequently used for enthusiasts' tours of the Manchester, Wolverhampton and Bournemouth trolleybus systems.

This vehicle is stored off-site and is awaiting restoration.