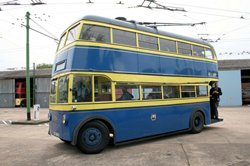 The South Shields trolleybus system was inaugurated on 12 October 1936 when four Karrier E4 trolleybuses with Weymann H56R bodywork entered service between Market Place and Freemantle Road. The trolleybus service proved extremely popular and a further four similar vehicles were purchased in 1937 to replace trams on the Stanhope Road service; 204 was the first of this second batch. The only difference between the batches was that the second were 55-seaters with one less seat on the upper deck.

The Karrier E4 chassis is unusual in that the traction motor is under the cab floor; usually British trolleybuses have the motor mounted amidships under the lower saloon floor. The Weymann bodywork is composite-framed because it has traction lighting which is fed from the overhead line at 550 volts, in banks of 5 lamps of 110 volts in series.

204 entered service on 30 April 1937. In 1950 a route number box was provided alongside the front ultimate destination indicator, ready for the introduction of route numbers. Other than that 204 had a remarkably uneventful 26 years in service.

The Reading Transport Society had made enquiries regarding the purchase of South Shields' first trolleybus, no.200, for preservation. The South Shields Transport Committee agreed to make a gift of the vehicle to the Society. Unfortunately 200 was damaged in an accident inside Chichester depot and 204, withdrawn in February 1963, was provided as a substitute vehicle.

204 was kept in outside storage in Reading during the early years and like Reading 113 the bodywork deteriorated badly. Following its transfer to Sandtoft in 1970, 204 was kept under cover waiting patiently for her turn to be restored. A major and very expensive body rebuild commenced in 2001 and a thoroughly professional job was carried out at Sandtoft by a volunteer team - click here to see some photographs of 204's restoration. Much of the money to finance the rebuild came from the BTS membership following a number of appeals.

In May 2005, 204 entered service at Sandtoft looking absolutely magnificent. 204 is the only Karrier E4 and also the only South Shields trolleybus in preservation.