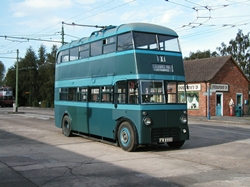 Replacement of the Grimsby District Light Railway began in 1926, with the conversion into a trolleybus route of the branch tramway from Riby Square, Grimsby along Freeman Street, Grimsby. The second Grimsby trolleybus route, a replacement of the main tramway section between the Old Market Place in Grimsby and Kingsway in Cleethorpes, was not opened until November 1936.

The tramway, which had been taken over by the Cleethorpes Urban District Council in July 1936, continued to operate until mid-1937, with a reduced service between Riby Square and Cleethorpes. It closed on 17 July 1937, and the new Cleethorpes trolleybus system was inaugurated the next day, operating jointly with the Grimsby system, on the Grimsby–Cleethorpes route, which was extended to Bathing Pool.

Operation of both trolleybus systems was transferred to the Grimsby Cleethorpes Transport Joint Committee in 1957 and they were closed on 4 June 1960. Some of the redundant trolleybuses then served on the Walsall system, until that system's closure in 1970.

Number 54 is the sole survivor of a batch of ten vehicles purchased by the operator in 1937 to commence trolleybus operation.

When war broke out, restrictions were placed on services provided in coastal resorts. As a result, the newest of this batch were sold to Nottingham Corporation Transport in 1940 but 54 was not one of them.

Originally liveried in dark blue, relieved by three cream bands and yellow lining out, in about 1944 this was changed to larkspur blue. About 1950 the livery was changed again, to Corfe grey with three light blue bands. After the merger with Grimsby the number 100 was added to the fleet numbers of the Cleethorpes vehicles. Number 154 as it became did not receive the new operator's  mild blue and cream livery.

In 1958, 54 was withdrawn from service and sold to a Grimsby scrap merchant. It was rescued for preservation in 1968, arriving at the Trolleybus Museum in 1971. In 1975 it passed to its present owners who are completing its restoration to post war Cleethorpes condition.

During its time in the scrapyard 54 suffered serious damage to its platform and stairs. It is now nearing the end of a painstakingly long restoration so this unique trolleybus should soon be ready for its introduction to service at the Museum. Read more at: www.cleethorpes54.org.uk

This vehicle is not currently operational but can be viewed at the Museum.