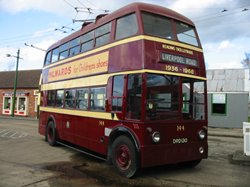 Reading Corporation ordered 20 of these 4-wheel BUTs for two new trolleybus routes that opened in 1949. Numbered 138 to 157 they were the first 8-foot wide vehicles in the fleet. The handsome Park Royal bodywork included safety features such as cab mirrors to allow the driver to view the lower saloon and (most prominently) platform doors. These operated an interlock cutting power to the motor when open. An over-ride for emergency use was provided in the driving cab, but this illuminated two bulbs mounted on the bulkhead behind the driver which were visible through the windscreen: this enabled an inspector to see from a distance if the over-ride was in use.

In 1966 Reading decided to do away with its trolleybuses and as the 138-157 batch were the oldest and smallest vehicles in the fleet they were often first in line for withdrawal as the system contracted. 144 was withdrawn from service in September 1968 but had been purchased for preservation by Mike Dare, the Trolleybus Museum's founder, and was repainted and lettered as the town's last trolleybus at Mike's expense. 144 therefore was the last vehicle in the convoy performing the ceremonial last journey on 3rd November 1968 - the others were Sunbeam 6-wheelers 174 and 181, now also preserved at Sandtoft.

Mike Dare bequeathed 144 to the Museum when he sadly died in 2005. 144 has returned to Reading twice - in 1976, to celebrate the 75th anniversary of Reading Transport and again in 2018 to commemorate the 50th anniversary of the closure of a trolleybus system which is still remembered with affection in the town.

144 was repainted for the 2018 event and is a regular performer at the Museum.